Well I have hung around null sec now for a week or so and was surprised how quiet it can be if that is what you are looking for.

As a new player, 0.0 has an entirely new set of terminology that does not build a huge willingness to venture out of empire space; gate camps, bubbles, pirates, large wars, etc.  I started post release of Aprocrypha but pre Dominion.  0.0 space appeared to be pretty much closed down ... yes there was stories about Band of Brothers (http://www.eveonline.com/ingameboard.asp?a=topic&threadID=990381&page=1) etc. that meant it was not completely out of bounds but for all intents and purposes, unless you join a corp that is part of one of the main alliances it is going to be hard to establish space all on your own.

Reports on renting space (sharecroppers) are certainly not getting the best of reviews: http://www.tentonhammer.com/node/67275.  Whilst trying to find moons that make it worth it are difficult as most of them are taken (I assume).  Dominion has changed this to a small degree as held regions have been reviewed and reduced but still, most of the high value areas have remained in the grasp of the larger alliances.  See http://www.rifterdrifter.com/2010/01/a-quick-introduction-to-nullsec-politics-part-1/ for a review on nullsec post Dominion (also a good blog in general). Will CCP release infrastructure hub modules at improve a moons minerals?  We will have to wait and see.  What I did find out in my roaming was that this is definitely a sandbox; if there is a large war going on somewhere else with a large number of ships, it will crash the whole of EVE.

All this aside I have seen a large amount in the last week and learnt a huge amount to; how to avoid a gate camp, avoiding bubbles (or getting out of them when you cannot avoid them), null sec scouting, moon surveying and lots more.  Have seen too many macro ratters / miners in low sec (especially in the quieter areas of nullsec) and would still like to see some of the larger battles.
at 08:58 No comments:

Email ThisBlogThis!Share to TwitterShare to FacebookShare to Pinterest
Labels: 0.0

Playing EVE and not being in a corp is like having pizza without the toppings.  After 10 months of playing I still do not know why it took me 2 weeks to join a corp; I should of done it straight away. I would certainly have a very different outlook on the game had I not joined NERF.

For a new player the benefits you get from an active corp are huge, though it does depend on the corp you join. NERF was a hi sec industrial corp when I joined and in the intervening time we have had four hi sec wars (pretty sure it is four), moved to low sec, started some pvp, grown a reasonable amount (need much more), undertaken extended w/hole ops and had a very (very) short venture into 0.0.

In this time I have become a director (no want to be a CEO) and have the enviable task of getting people together for PVE missions.  Actually getting people to mission is not hard, there are regular fleets available ... getting people to do it for the corp is a lot harder (giving their hard earned loot to the corp hanger).

What now though?  Who knows ... there are lots of debates going on but one thing is certain we need to grow, we need to change to be able to do some of the things we dream up and so this coming year will hopefully see more change, more growth and some exciting changes.

In summary if your not in a corp ... get in one.  NERF is recruiting if your interested and we need all sorts of pilots ... join NERF! if you want to chat.
at 08:29 No comments:

Email ThisBlogThis!Share to TwitterShare to FacebookShare to Pinterest
Labels: Corporation

Well I thought it was about time that I got a little more savvy with my ammo selection.   I have therefore put together the table below as a forum of quick reference.  Have added what I think is the best selections for the various factions and pirates.  Let me know what your experience is and I will update. 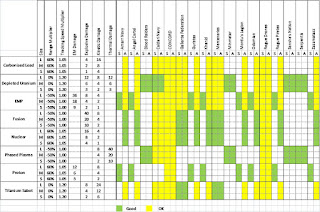 Well, spent a large proportion of this week running around null sec and amazed at how empty it is.  Having spent the last eight months in high and low sec was amazingly peaceful out there.  I realise that I was not in large contested areas but still I did expect to see more people.

Jumped into one system where two guys threw up a bubble as I jumped through but luckily they were in cruiser (or BS, too busy to look as I was trying to get away) sized ships, so just burned out cloaked and jumped on.

Was surprised at the lack on stations and now see why logistics is such a big issue in null sec.  JF much needed as well as a good POS somewhere definitely required if am going to take full advantage of everything out here.

Decided it was time to better my PvP skills so am planning on doing an Agony Unleashed Basic PvP course at the end of the month; will let you know how that goes.

Got myself a tempest recently and have realised how much my skill based was shields orientated so back on to core training again.  Will help though with sorting out a proper PvP fitted hurricane so time to stop putting that training off.

Email ThisBlogThis!Share to TwitterShare to FacebookShare to Pinterest
Labels: Scouting

Happy New Year One and All

I hope you all had a great Christmas and New Year.  Life has not been boring at all .. and currently it looks like that is not going to stop.  I realise it has been a while since I last wrote on here, is always difficult to keep things up; as writing here means I am not playing EVE or RL has taken over.

In the last month I seem to have managed to do many new things; some good and some not so good.  I have spent a fair amount of time roaming around null sec recently getting to grips with the ins and outs of things and breaking down those images of null sec being a terrible place.  Our corporation finally sorted itself out and has started up a new alliance; some of our old friends have joined us, we have new friends, and some weren't invited.  From here we will see what is going happen; there is lots of ambitious talk at present and I am excited to see what happens.

I lost my first ship due to not paying attention whilst missioning in low sec; I am not going to complain though as I learn a huge amount and also discovered that I am not as bad as I thought I was.  It took my aggressors rather a long time to kill my ship and if I had a way of breaking the scramblers I would of managed to get clear.  What else did I learn, well in the words of Douglas Adams ... "Don't Panic."  With a clear head there are lots of things you can do (even if that is sit and watch your shields slowly turn red).  Still I lost the ship which is a shame but onwards and upwards.

My own plans are also getting bigger and I have to say I am going to need to work on my isk for some of those to happen.  With this taken into account I guess the next stages for me as a approach my first year are:

Well will check on this through the year and see what happens.  Anyway hope everyone had a great time over the holidays and fly safe in the New Year.
at 16:05 No comments:

So a year has been and gone and EVE is far less of a complex universe that it was when I first climbed into my pod. Capitals are calling along with the draw towards null sec, but there is still a lot to do before then. These are my random ramblings of life in New Eden, in a vain attempt to journal what I am up to or what I have learnt.
KT